So a blind Muslim, a fundamentalist, and a spirit-filled Christian meet each other on the street. Sounds like the beginning of a joke, but for me, it was one of the more important scenes I’ve ever filmed.

I was in Istanbul, Turkey, with a group of radical Christians led by Georgian and Winnie Banov, and this was to be the final shoot for my first movie, Finger of God. Right now the group was walking through a village on the outskirts of town just trying to bless people and pray for the sick, and a mutual friend of ours had joined us for this part of the trip.

Heidi Baker is one of the most radical lovers of Jesus on the planet, and she is an inspiration to millions in her childlike faith and miracle-filled life and ministry.

I may have been new to making movies, but at this point I knew enough to know that if Heidi was around, it was probably a good idea to be near her with my camera ready to roll. Sure enough, I shuffled over when I saw her engaging with a blind woman. Unfortunately, Heidi had to use an interpreter, and he wasn’t really interpreting her the way she wanted.

It was a theological standoff. Heidi wanted to pray for the woman to be healed, but the interpreter kept telling the woman that she had to accept Jesus first, and then He would heal her. 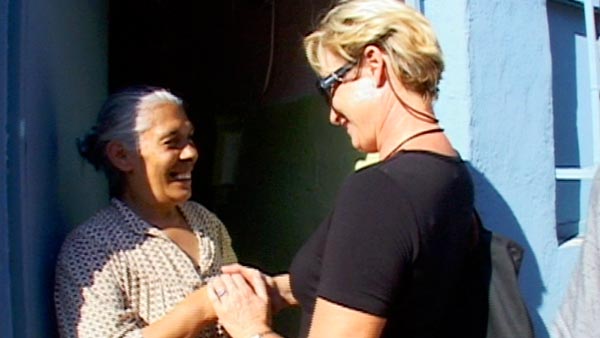 The woman was a staunch Muslim, and kept protesting that she was a follower of Mohammed.

Heidi was growing visibly frustrated as she tried to explain to this man to just let her pray for the woman, she would be healed, and then she would know how much Jesus loves her and that He is real. But the man wouldn’t hear of it, because his theology said differently.

They never really worked out a solution, and the woman went back into her house still blind and still a Muslim.

It was a lesson in the power and destructiveness of holding theology above our ability to love people. Heidi simply wanted to love this woman and show her how much God loves her as well, but that didn’t make sense to the interpreter.

Why would God heal a sinner?

For him, this encounter was about an outcome, not the person. And he is certainly not alone in his approach to the world. There are many, many Christians who take the same, outcome approach to the world around them. If someone isn’t “saved” when you pray for them, well then what’s the point? Why heal someone only to let them continue on their journey to hell?

But that is completely missing the point of a God encounter, or of God’s miracles even. The point of Christianity is not to get people saved, but to make disciples—it’s about relationship, not joining a religion.

After making 5 movies in 10 years where I have been surrounded by some of the most amazing ministers in the world and have seen countless scenarios that would make a fundamentalist’s head spin, I have become convinced that how you view people in large part will determine how you present God to them.

Both are true, obviously, but most people have more of a bent towards one or the other. The problems really come in when the two sides can’t figure out how to work together in unity, love, and respect. When both sides are staunch in their approach, the result will almost always be the blind returning to their homes just as blind as they started.